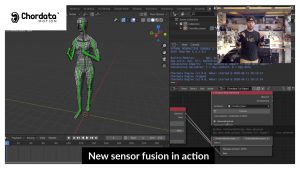 We have recently released the Notochord 0.2.0 and the complete version of our new Blender addon. These releases give you access to the new sensor fusion algorithm, bringing improved accuracy and stability to the capture. Together with the new sensor fusion, they come with a faster sensor calibration algorithm and a live visual representation of the magnetic disturbances on the proximities of the sensors.
In the following video, Bruno shows a small Demo of these new features.
If you have a suit at home you might be interested in watching the extended version we’ll publish where he goes through the entire process from accessing the Raspberry to get a calibrated pose that we’ll publish next week.
If you don’t have a Chordata Motion kit yet, don’t miss the chance to get it at a very special price through the Kickstarter campaign. Pre-order it at https://chordata.cc/pre-order/ to get early access to the limited Eary-Bird rewards!